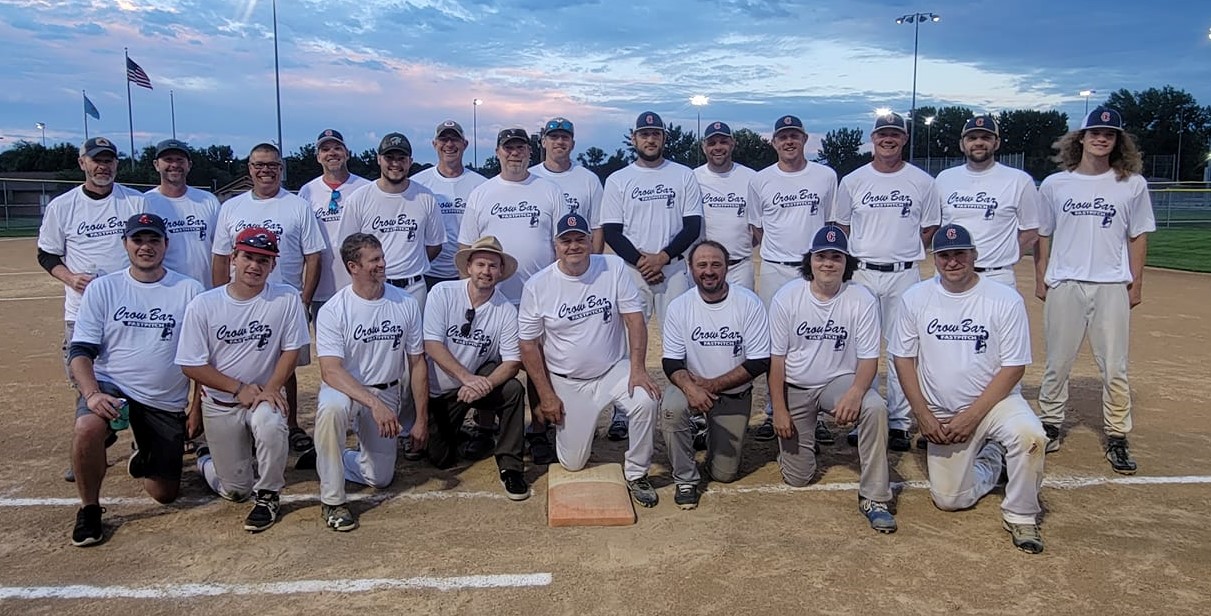 Kerwyn Lykken has been a staple in the Sioux Falls Men’s Fastpitch for a lot of years. For most of those years, he has been both a player and manager for the same sponsor, the Crow Bar & Casino Lounge.

Kerwyn Lykken kneeling on the bag.
Kerwyn, who is still active as the manager and player of “The Crow” had his 70th birthday on July 27th, which just happens to be SF Men’s Fastpitch League night in Sioux Falls.
It seems that Kerwyn had a little problem writing up the line-up Wednesday night though. You might think it could have been an age issue. It wasn’t.
Instead, it was because the team received new uniforms and they forgot to tell Kerwyn. Also, he had a few more players than he has on a normal Wednesday night.
Instead of the usual nine or ten players who show up on any given Wednesday, he now had 20 guys. Not only was the current team present but a bunch of former teammates decide they wanted to be part of Kerwyn’s birthday games as well. Kerwyn had the luxury seldom seen anymore. He could write the line-up for a league game and still have 10 players on the bench.
Then he discovered that his problem was still not over as it became apparent that the printer made a mistake. Every player was named Lykken and they all had #70 for a uniform number!
Happy Birthday Kerwyn, your players, former teammates, & friends just gave you a rare honor on the field. Well played guys, well deserved Mr. Lykken!

SDASASA Info Menu
ASA/USA SOFTBALL LINKS
Warning: "continue" targeting switch is equivalent to "break". Did you mean to use "continue 2"? in /home/sdasasof/public_html/content/modules/mod_sr_menu/helper.php on line 88

Warning: "continue" targeting switch is equivalent to "break". Did you mean to use "continue 2"? in /home/sdasasof/public_html/content/modules/mod_sr_menu/tmpl/select_list.php on line 33