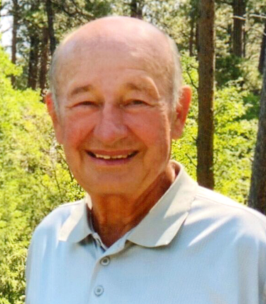 Funeral service will be 10:30 am, Monday, September 26, 2022 at New Life Evangelical Free Church in Watertown with Pastor Michael Wallenmeyer officiating and Fire Chaplain Hank Roso speaking. Kris Lauseng will be the soloist accompanied by Brenda Ingalls.

Visitation will be 6-8:00 pm, Sunday, September 25, 2022 at Wight & Comes Funeral Chapel in Watertown.
Interment will be at Mt. Hope Cemetery in Watertown.

Honorary Casketbearers will be the Watertown Fire Rescue and Roger’s golfing buddies.

Roger James Mohrmann was born September 4, 1946 in Columbus, Nebraska to Arville G. and Irene H. (DeBoer) Mohrmann. He grew up on farms near Columbus, Ramona, South Dakota and Madison, South Dakota. Roger graduated from Ramona High School. He then attended Dakota State University where he earned an Industrial Arts major.

Roger was employed as an Industrial Arts teacher for five years at Castlewood and Grant Deuel schools and then worked for Northeast Grain Terminal. He joined the Watertown Fire Department in 1977 and proudly served for 28 years before retiring as an assistant chief. Roger also worked various jobs on his days off from the fire department such as carpentry work, tree trimming and tree spraying.

His love of fastpitch softball started when he was a catcher for the Ramona Blues team. After moving to Watertown, he played for various other teams. He enjoyed participating in and attending sporting events. Roger loved watching his children and then grandchildren in their activities. He also enjoyed golfing, hunting, fishing and playing pickleball.

He was a longtime member of First Baptist Church where he served on the Trustees Board and was also the custodian for 17 years.

He was preceded in death by his parents, Arville and Irene Mohrmann; and his parents-in-law, Floyd and Leona Weeldreyer.