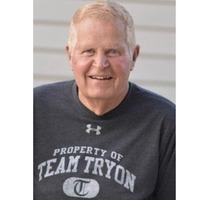 Jerry Jay Tryon, age 77, of Carroll passed away on Monday, August 31, 2020 at the University of Iowa Hospital in Iowa City.

A private family funeral service will be held on Saturday, October 3, 2020 at the First United Methodist Church in Carroll with Rev. Terry Plocher officiating.  Burial will be in the Merle Hay Memorial Cemetery near Glidden.

Funeral arrangements are under the direction of the Dahn and Woodhouse Funeral Home in Carrol and online condolences may be left for Jerry’s family at www.dahnandwoodhouse.com

Those who wish may mail cards and memorials to: The Family of Jerry Tryon c/o Dahn and Woodhouse Funeral Home, 705 N. Carroll St. Carroll, Iowa  51401.

Jerry was the son of Dorothy (Densmore) and Clarence Tryon.  He was born on May 27, 1943 in Harlan, Iowa. When Jerry was very young his family moved from Defiance, Iowa to Glidden, Iowa where he was raised along with seven brothers and two sisters. Jerry was a four sport standout for the Glidden Wildcats until he graduated in 1961. When he left Glidden, Jerry continued his academic and athletic career as a Buena Vista Beaver where he captained the football team and graduated in 1965.

On August 23rd, 1964 Jerry married his high school sweetheart Jerilyn Ann Peters. For fifty six years, through ups and downs, thin and flush, right up until the time of his death, they never left each other’s side. Through this union Jerry’s greatest treasures were born in his daughter, Tammi, and three sons, Lynn, Todd and Tyler.

Jerry was a coach and a teacher. That’s what he did and that’s who he was. He spent the majority of his life in education and coaching football. His first stop out of college was in Pomeroy, Iowa. As his family began to grow, so did his aspirations as he made stops at Ballard of Huxley, Alta and Jefferson. In Alta and Jefferson he took on extra duties as the athletic director of both schools. He continued to coach football at each stop and found great success running his own interpretation of the double wing as well as coaching baseball, basketball, track, and wrestling. In 1977 Jerry and a fellow coach decided to take a break from education and move to Carroll, Iowa and opened Iowa Sporting Goods. Jerry ran this business until 1985 when his life’s calling spoke to him again,

Jerry returned to coaching and teaching at Ar-We-Va where he would finish his career. He was able to coach his three boys there in three different sports with Jerilyn in the stands for nearly every game. Jerry was very proud that at this point in his career, there would be four Tryons coaching along Highway 30 with brothers Larry in Ogden, Dale in Boone and Dick in Nevada. Holidays in Glidden were some of the best coaches clinics in the state. Jerry always said he was most proud that in all of his years of coaching, he never had an athlete quit any of his teams. In 1998 Jerry was inducted into the Iowa Football Coaches Association Hall of Fame. He retired from AWV in 2005.

Jerry loved sports, whether he was coaching, playing or watching. He was an avid golfer and really enjoyed meeting his brothers at The Hill for a quick, cheap round or playing cards with them. He was a huge fan of the Duke Blue Devils and the Sioux Falls Storm, but his greatest joy was loading up the car with Jerilyn and going to watch any and all activities that the grandchildren were in. Each week they would alternate staying in Carroll, going to Sioux Falls or heading east to Vinton. If there was a big event Jerry was not going to miss it.

To send a flower arrangement to the family of Jerry Tryon, please click here to visit our Sympathy Store.