Obituary for Mary Houck, Grandmother of Kortney and Brady Hastings 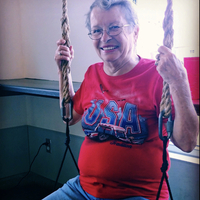 On July 30, 1956, Mary married her high school sweetheart, William H. Houck in Mitchell, South Dakota. Mary and Bill raised their three daughters in Wolsey where they were very active in the community. Mary worked for GMAC from 1956-1958, Beadle County as the Deputy Auditor from 1958-1965, Carson Locker from 1965-1977, and the United States Postal Service from 1969-1999. Mary became Postmaster in 1975 and continued that until her retirement.

Some of Mary’s favorite activites were games, whether it was a card, yard, or party game, Mary always participated. Mary loved to quilt and crochet. She and her family spent every summer at Clitheral Lake in Minnesota. In her recent years, she enjoyed spending time and watching her great-grandchildren participate in activities. If the Warbirds were playing, Mary was sure to be in her spot! Mary was a member of the National Association of Post Masters of the US, Grand Matron of Eastern Star, and Legion Auxiliary. Mary was a lifelong member of Wolsey Presbyterian Church.