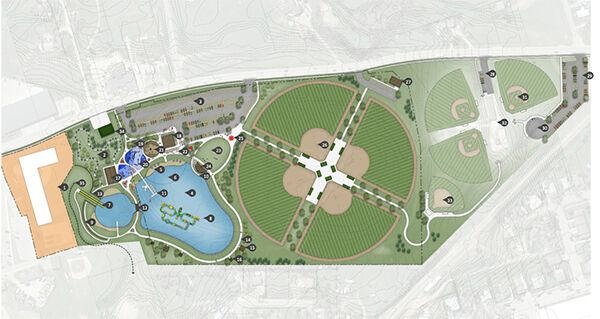 Sturgis residents will have a chance to weigh in on three concepts for the proposed Sturgis Lakeside Adventure Park at a meeting scheduled for Jan. 10.

The special listening session, which begins at 6 p.m. at the Sturgis Community Center, will be a joint meeting of the Sturgis City Council and Sturgis Aquatics Committee.

City officials say the purpose of the meeting is to further discuss the information provided by Fennell Design Consultants in their recent report to the Sturgis City Council.

Gene Fennell presented a design report for the park at the Dec. 20, meeting of the council. You can find the report here:

Fennell told the council that within the report they hoped to address concerns shared by citizens at town-hall meetings and a design open house.

“We pulled all those concerns together and tried to address them within this full report,” he said.

The concept of the Lakeside Adventure Park is unique not only to Sturgis, but also the Black Hills and South Dakota.

The process of creating a park was set in motion in 2020 when the city began discussing some sort of outdoor aquatics venue within the city. The city made a call for citizens to serve on a committee to discuss the options.

The committee hosted several town-hall type meetings to present their ideas. A community engagement charrette was held on Oct. 11 and 12 at the Sturgis Community Center. Its intent was to be an intensive planning session where citizens, designers and others collaborate on a vision for development, as well as a forum for ideas that offers the unique advantage of giving immediate feedback to the designers, and allow everyone who participates to be a mutual author of the plan.

Concept No. 1 called “Lake and Ballfields,” would be just that, the proposed lake and other amenities, with the addition of slow-pitch softball and little league baseball fields.

Designers would use about 35 acres with nine of those acres begin designated for a softball field clover (four adult slow pitch fields with 315-foot outfields) and up to four Little League fields (200-feet minimum outfields).

About 2.3 acres of the site would be used for multi-family housing development.

Concept No. 1 is the most expensive, around $14 million, because it contains new ballfields at a cost of around $5 million.

The main conceptual idea behind Concept No. 2 called “The Loop,” was to generally center the park in the site and explore development opportunities along an exterior one-way access loop around the border of the 20-acre site.

The main idea behind Concept No. 3 was to split the site equally between private development and public park space thus naming this concept, “The Split.”

The area utilized by the park would be about 10.3 acres and that used by the development the same – 10.3 acres. Concept No. 3 would cost about $4.6 million.