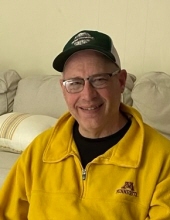 Ron was born on September 11th, 1962, to Jerome and Shirley (Wittler) Leidholt in Pierre. He grew up and attended school in Pierre, graduating from high school in 1981. After graduation he attended Mitchell VoTech (now Mitchell Technical Institute), graduating in 1985.

During high school, he met the love of his life, Cari Jorgensen, and they were united in marriage in Pierre at the First United Methodist Church on June 16, 1984. To this union three boys were born – Lukus, Sam, and Ben. They made their home in Pierre where Ron worked first for Leidholt McNeely and Leidholt, then the South Dakota State Lottery, and finally at UPS.

Ron was very active in his sons’ lives whether coaching their teams or attending their sporting events and activities. He loved sports and coaching and was always trying to make sports a learning opportunity about life with the athletes he worked with. He was active in the Lions Club, Legion Post 8 Baseball, and coaching for Pierre Fastpitch Softball.

He loved spending time with his family and grandkids. He enjoyed outdoor activities and especially the time he spent tootling around the Black Hills in his side-by-side with Cari.

He is preceded in death by his parents Jerry Leidholt and Shirley Leidholt.

In lieu of flowers, the family wishes memorials be made to the Ron Leidholt Memorial Fund at American Bank and Trust (700 E Sioux Ave, Pierre, SD 57501; 605-224-9233). These funds will be gifted to Pierre Girls Fastpitch Softball in Ron’s memory.