Riswold to Conduct Umpire Clinics at US Military Bases in Europe

Most athletes hope to reach the top level in their chosen sport. Sports officials have the same goals. 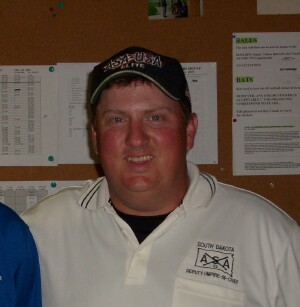 Steve Riswold from Sioux Falls, a National Staff member as well as South Dakota ASA & Region 11 UIC, is one of the top clinicians in the country. That is evident with the excellent ratings of the umpires we are sending to National Tournaments. Steve has worked with his deputy UICs at umpire clinics as well as training on the field.

To help us realize that fact it was recently brought to my attention that Riz will be representing ASA/USA Softball for 10 days of clinics at US Military bases in Europe.  He will be at a base in Vicenza, Italy from April 12 – 16. Then will travel for a couple days to Germany for clinics outside of Frankfurt at Kaiserslautern Military Community, Ramstein Air Base April 19 – 23 before heading back to South Dakota for the start of our summer season.

Even though the trip is a once in a lifetime opportunity, Steve had second thoughts to accept the assignment this year as it fell on the weekend of the SD ASA State Umpire School.

Riz explains “I had a call from Director of Umpires Kevin Ryan asking if I would represent ASA/USA Softball in Germany and Italy training umpires over the same time period.  I first considered asking if I could go another year. After talking to others who have made the trip, I was encouraged to go.  There was no guarantee I would have another chance, or that the program where ASA/USA Softball sends a clinician to Europe will continue. It was an opportunity that might not ever happen again.”

Riz may work with umpires from all branches even though the two bases he is working on are primarily Army bases. 15 to 20+ umpires will attend the clinics while in Italy and 20 to 30+ while in Germany. Not sure if any of the umpires will be foreign umpires as usually the WBSC train those.|

Ryan said the partnership with the military started approximately in the year 2000.

“Steve will be the only ASA Clinician at the bases” replied Kevin Ryan. “We send one instructor every year to conduct clinics in Italy and Germany for our Military Umpires. In the past nationals staff members ASA Director Craig Cress, Gene Harrison, Jim Craig, Bill Silves, Larry Montgomery and Julie Johnson have been chosen and attended.”

“Steve is an excellent instructor” said Ryan “The umpires in Europe work primarily Slow Pitch and as we all know Steve is one of the best in the game of Slow Pitch softball. He was chosen because we know he will represent all of ASA/USA Softball umpires and their respect for the US Armed Forces.”

It is this writer’s opinion that Steve's accomplishments reflects highly on all of our umpires in SD ASA softball program.  I asked Mr. Ryan if there was anything he wanted to add with this in mind.

“It is indeed honor and a privilege for ASA/USA Softball to send an instructor to Europe to help train and make our military umpires better umpires. They look forward to getting better and becoming the best umpire they can be.” Ryan went on to say “It is a small way for us to give back to those who give so much for us to do what we do. As an ASA/USA Softball representative Steve is excited to be able to do this. Why anyone would not see this as special for ASA/USA Softball and South Dakota ASA would be beyond me.”

Thrilled to be going, Steve’s thoughts are still with his umpires at home. “I know the Deputies bring experience and knowledge to our umpires. It will be a good thing for them to take a more active role at the state clinic. Veteran national staff clinician “Wild” Bill Silves will still be making the trip and will help Rich Skorheim, LeRoy Zafft, and SD ASA UIC staff , it will be a well run state school.”

No one works harder for the umpires of South Dakota and the Northern Region than Steve.  He has been very successful in getting our umpires to that top level. South Dakota umpires are getting opportunities in ASA/USA National Championships as Steve has built relationships around the country. Those high ratings at the National Championships to which our Umpires are assigned ensure that will continue.

That last fact is directly attributable to his ability to work with his deputies. I have no fear of  anyone of the deputies being an clinician as well as being assigned to be UIC at a State or National championship. They will ban together at the State Umpire Clinic and each help in their area of specialty. At the same time Steve Riswold will be training umpires in the Arm Forces to be just like our SD Umpires, 'be the best umpires that they can be.'

Congrats Steve for reperesenting SD ASA with this assignment as well for helping many umpires reach that top level!