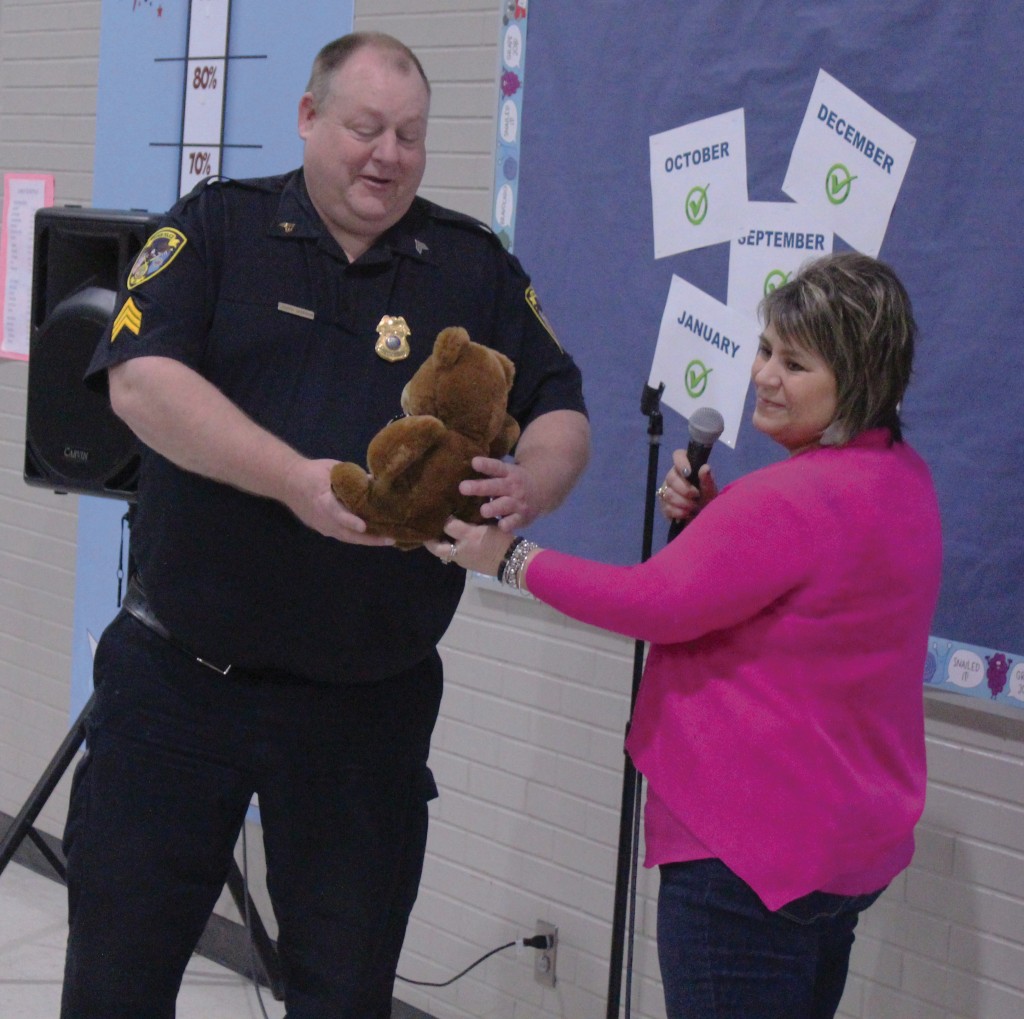 HURON — Students gathered in the lunch room at Buchanan Elementary on Friday morning to surprise Officer Joe Skorheim and thank him for his 29 years of service with the department. More than anything, they wanted to honor the man who has come to be affectionately known as “Officer Teddy Bear.”

Buchanan Principal Peggy Heinz presented Skorheim with a teddy bear, complete with a badge, in honor of his nickname. He was also presented with a candy bouquet with balloons and a collection of cards that students had made for him.

True to his years of service as the School Resource Officer, Skorheim spoke to the room filled with students, teachers, and his fellow officers about his time while also reminding them to look “left, then right, then left” before crossing a street as well as numerous other reminders. Heinz recalled that her children mentioned Skorheim as they encouraged her to buckle her safety belt when driving.

Student Travis Peterson discussed how Officer Teddy Bear had taught him to go to a corner and use a crosswalk to cross the street. He received a high-five from Skorheim after talking in front of the large group.

Skorheim told the children present to remember the things that he taught them, but also that he was still someone they could approach. “If you guys see me in town, you can still run up and call me Officer Teddy Bear,” Skorheim said with a smile.

Through tears and plenty more smiles, Skorheim discussed his work with children and his focus on “humanizing” the police force.

“I love being the teddy bear for the kids,” Skorheim recounted. “So many of them have a negative view of the police or are intimidated, and I want them to know they can always be comfortable and feel safe with an officer.”

He discussed his time working with youth and stated that his future very well may involve working with young people again, just without the badge this time. As he recounted his years of service and working with children of children that he worked with when he first began, Huron Chief of Police Kevin Van Diepen called back, “Hey, Joe, don’t cry!”
With tears and memories glistening in his eye, “Officer Teddy Bear” had just one reply:
“Too late.”