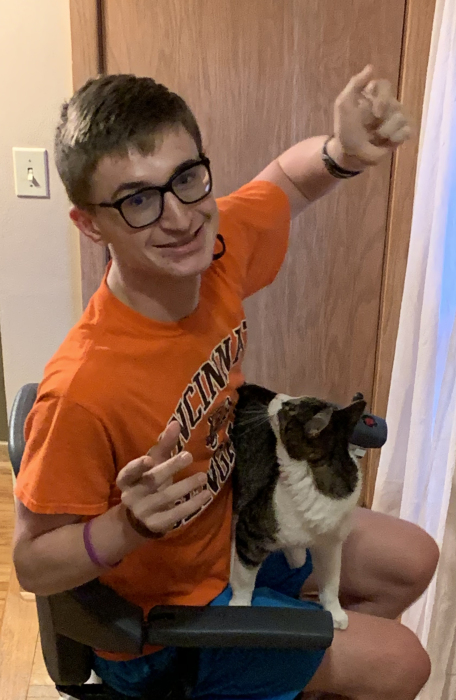 Cherished family member and friend Wyatt Joseph Niemann passed away Friday, November 6, 2020, at 17. He left this world surrounded by his family at the Sanford Children's Hospital. Wyatt was the beloved son of Garrett and Jody Niemann Priest and the late Tracy Niemann of Watertown.

A public walk-thru visitation will be held on Monday, November 16, 2020, at the Watertown High School Civic Arena, from 5:00 – 8:00 p.m. Face masks are highly encouraged. The family will hold a Celebration of Life at a later date.

Wyatt was welcomed into this world on June 11, 2003, to Tracy and Jody (Ellis) Niemann. Watertown was Wyatt's home his entire life; he was a student at Mellette Elementary School, Watertown Middle School, and a junior at Watertown High School upon his passing. Wyatt's father passed away on January 22, 2009. Excited to become a family, Wyatt said to his mom, "We are marrying Garrett, YEA!" upon Jody and Garrett's engagement. They officially became a family with their marriage on September 15, 2012.

Active in his community, Wyatt was a member of many organizations. He was involved in the Cornerstone United Methodist Church youth group until he was physically unable to attend.

From first through ninth grade, Wyatt was a member of the Watertown Destination Imagination team. His time in DI culminated with his participation in the Global Tournament in Tennessee. Watertown Area Special Olympics held a significant place in his heart where he competed in aquatics, equestrian, and bowling, receiving multiple gold medals and first place ribbons.

Wyatt participated in many school activities; he was a member of WMS and WHS marching, pep, and concert bands, where he played the tambourine. He also was a member of the chorus throughout middle school and part of high school. His classmates and teachers always found special ways to include Wyatt in everything, including playing the role police officer in the Middle School musical "Annie." His favorite classes in high school were band and any class that Garrett was teaching.

Wyatt had a huge passion for all animals and was an annual member of the Bramble Park Zoo. He spent many hours visiting and taking classes at the zoo. Spending time at Joy Ranch brought Wyatt much enjoyment; he attended camps and received his equestrian program certification.

Wyatt especially loved his cat, Tazzy, and the family dogs Lilly and Tally. In fact, he loved every animal he encountered.

On July 22, 2019, Wyatt received the Young Hero's Award from the SD National Guard. He celebrated this honor with his many family members who are veterans or current members of the military. Wyatt was an ambassador for Juvenile Huntington's Disease and The Shepherd's Gift: GM1 for H.D. He was an ambassador for Make-A-Wish following his Make-A-Wish trip to the National Aquarium in Baltimore and the Smithsonian's National Zoo in Washington D.C. He was an active Eagle Scout in BSA Troop #8. Wyatt's involvement in scouts included special high adventure activities, such as rock climbing, where his fellow scouts assisted him. His Eagle

Scout project to help the Beacon Center was loved by and involved the whole community.

Wyatt especially enjoyed spending time with family at Lake Madison, boating as "Captain Wyatt" and jumping off the dock's end with his brothers and cousins. He loved adventure, especially roller coasters. His motto was, "Hands in the air like you just don't care." Wyatt loved traveling, eating out, and cheering for the Watertown Arrows and the Cincinnati Bengals. He even got the chance to make a special friend with Andy Dalton (Quarterback of the Bengals), who spent part of an afternoon giving him a stadium tour and introducing him to the team and coaches.

Wyatt touched countless people with his cheerful personality, contagious smile, and endless perseverance. Wyatt set an example of how to love others, animals, and life. He showed us what courage looks like while battling his illness. He brought out the best in all of us. Wyatt is our hero, and his absence will be felt by many.

In lieu of flowers or gifts, the family is requesting memorials be directed to BSA Troop 8, 202 2nd St SE Watertown, SD 57201, or the Watertown Arrow Education Foundation P.O. Box 730, Watertown, SD 57201, where a scholarship will be established in his name. You may also choose to donate online at wyattjniemann.com or through Venmo at wjniemann.

The family requests visiting his website to leave tributes.

The City of Watertown is set to honor a Watertown teenager who died last week.

Despite becoming more limited by the neurodegenerative disorder, Niemann, the son of Jody and Garrett Priest, is fondly remembered for his cheery outlook on life and perseverance through challenges few people face.

One of Niemann’s most significant accomplishments was achieving the prestigious Eagle Scout rank. According to local Scouts BSA Assistant Scout Leader Joel Vockrodt, Niemann exemplified his strong will when he insisted on, and successfully completed, climbing the stairs to a fire lookout tower.

“He just outworked everybody else,” Vockrodt said. “He was a wonderful friend and an inspiration. He’s somebody who was my hero.”

Calling for a moment of silence at Monday night’s Watertown Board of Education meeting, Board President Stephanie Lenards relayed remarks about Niemann from school district staff members.

“One person said he was a wonderful person. Another said he showed up at school and did all he could,” Lenards said. “If you asked Wyatt how he was, he would answer, ‘Good. I’m good.’”

Niemann is also remembered for his smiles, leading people to say he had “smiles for miles who loved every living thing.”

As part of the proclamation, Caron and Niemann’s parents ask people to perform acts of kindness.

“Let’s fill this day with positive and meaningful generosity that Wyatt did everyday with his smile,” Garrett Priest wrote in an email. “Feel free to post pictures and posts as a way to honor him in your own communities as well. Our real life super hero will be loving this day from Heaven which is only two feet away!”