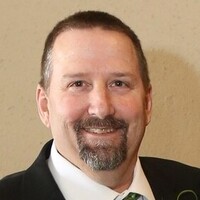 Richard "Rick" Carl Borkovec, 59, of Rapid City, SD, passed away Wednesday, January 20, 2021, after a courageous two-year battle with Mantle Cell Lymphoma. Just like he dealt with all experiences in life, Rick managed his disease with strength and grace and wanted to spend as much time with his loved ones as possible.

Mass of Christian Burial will be held at 10 a.m. Friday, January 29, 2021 at St. Therese the Little Flower Catholic Church, Rapid City. Burial will follow at the Black Hills National Cemetery, Sturgis. Visitation will be 5:00 p.m. - 6:30 p.m. Thursday, January 28, 2021 with a Rosary service to follow at Osheim & Schmidt Funeral Home.

In lieu of flowers, donations may be made to: Amber Seidel- 3207 10th Ave, Spearfish, SD 57783- to be given to sporting organizations in the Rapid City area to pay for sports equipment for children that can’t afford it.

After graduating from Erie (IL) High School in 1980, he was employed in the Quad Cities, IL area for a few years and then enlisted in the U.S. Air Force, where he honorably served his Country from 1983 - 1988. In 1990, Rick moved his family back to Rapid City, and found employment as a Hospital Equipment Specialist at Rapid City Regional Hospital (now Monument Health), working there until his death.

Rick was an active member of St. Therese the Little Flower Catholic Church and Knights of Columbus and lived his life as a witness for the Lord.

Rick loved hunting and fishing, providing many deer head and fish mounts over the years for his 'man cave'. He was also a sports enthusiast, enjoying college and professional baseball, basketball, hockey, and football. Rick was a diehard Green Bay Packers fan, making the journey to Green Bay to attend a game at least once a season. He was a longtime softball umpire and football referee in the Rapid City area, which allowed him to pass on his love of the games to future generations, something he had loved doing for his children.

He always made sure those around him were taken care of and supported. There was little he couldn’t fix and made use of his talents often to help out family and friends. He enjoyed gardening/landscaping, going to the movies, cooking, and recently dabbled in winemaking and canning.