Walter M. Stack, 88, Bismarck, passed away Monday, May 3, 2021 at his home in Bismarck. A memorial service will be held at a later date.

Walt was born on January 24, 1933 in Hankinson to Walter H. and Corrine (Thompson) Stack. His father died when he was one year old, and he was raised by his mother and maternal grandparents. He attended public schools in Hankinson and graduated from high school in 1950. He lettered in basketball three years and was a co-captain of the Hankinson team which won 24 straight games and won the District title for the first time in school history before losing the Regional Tournament. He was a pitcher and first baseman for the Hankinson American Legion baseball team which lost the championship game of the state Class B tournament by one run in 1949. He was the Sports Editor for his high school paper as well as for the 1950 edition of the school’s yearbook.

After graduation, Walt attended Chillicothe Business College in Chillicothe, Missouri, and then worked as a bookkeeper for Land O’ Lakes Creameries, Inc. in his hometown.

He was inducted into the U.S. Army in April 1953 and served two years during the Korean War. He was honorably discharged in April 1955 and resumed employment with Land O’ Lakes in their Valley City Plant. In 1962, he accepted a position as City Recreation Director and enrolled in Valley City State University. He moved to Bismarck and began work in the State Tax Department in December 1965. In May 1969 he married Donna Baumgartner in Bismarck where they continued to make their home.

He retired from state employment in December 1993, having served 28 years – nearly all as Director of the Sales Tax Division. Following his retirement, Walt was elected to a five-year term as the retiree representative to the Public Employees Retirement Board and was appointed by that group to the State Investment Board.

Walt was active virtually his entire adult life in the Amateur Softball Association as an umpire. He served two terms as state Umpire in Chief and was elected Regional Umpire in Chief in November 2003. In that capacity, he served for six years on the National Umpire Staff. He actively umpired the game for over fifty years. Walt umpired at the highest levels of ASA softball when he umpired in the Women’s Major Fast Pitch National Championship in 1972 in Tucson, Arizona, and the Men’s Major Fast Pitch National Championship in 1973 in Seattle, Washington. Walt was awarded the Regional Award of Excellence in 2001 and was a member of the National Indicator Fraternity, the Gold Level of the Umpires Medals program and had attained Elite Umpire status in 2002. He was a co-founder and editor of Softball News, a statewide newspaper and was elected to the state softball Hall of Fame in 1987. Walter served as an At-Large Representative to the North Dakota Amateur Softball Association Executive Board and was the President of the NDASA Hall of Fame Society. He was a life member of the Bismarck Elks and long-time supporter of the Central Dakota Humane Society. 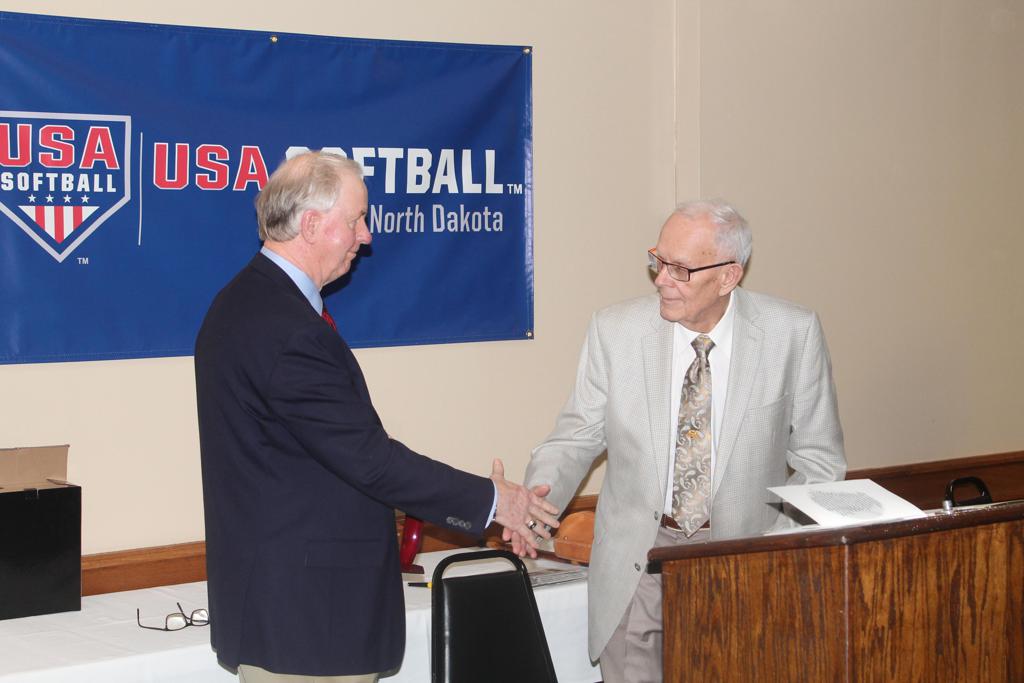 It is with a heavy heart that I write this column regarding the passing of my dear friend and a great friend of softball, Walt Stack.  Walt was indeed an icon in North Dakota Softball for 60 years who left an indelible impact on so many.

Walt started his umpire career in 1959 while working his summer job as City Recreation Director in Valley City.  After college, Walt moved to Bismarck in 1965 where he started umpiring in the fast pitch leagues.  Walt was named State Umpire in Chief (UIC) in 1970 by State Commissioner Duane “Tiny” Schafer.  Walt worked his first National Tournament in 1972 at the Women’s Major Fast Pitch tournament in Tucson, Arizona and was then selected to work the premier Men’s Major Championship in Seattle, Washington in 1973. Both of these events were huge assignments for a young umpire.  In 1976, North Dakota hosted its first National Tournament when the Women’s Major Fast Pitch was held in Fargo.  Walt went on to work in many national championships, including being named the UIC for fourteen more.

In 1976, Sam McQuade Sr approached his friend Walt Stack with the idea for a charity softball tournament to be held on an annual basis with the goal of raising money for local charities. The rest is history as the tournament has grown to as high as 480 teams with teams and umpires from all over the country.  Walt and his wife, Donna, worked many of these McQuade Tournaments and both served on the McQuade Board of Directors for 30 years.  In 2011, Walt and Donna were named to the initial McQuade Tournament Hall of Fame – a well-deserved honor for their years of dedicated service to this wonderful event.

In 1979, Walt had the idea of putting together a softball newsletter.  Commissioner Schafer agreed and the “Softball News” in North Dakota became the premier softball newspaper in the country.  Forty-one (41) years later the last edition was delivered in the fall of 2020.  The softball newspaper became a love affair for Walt and with the assistance of his wife. It was published three times a year and mailed to every player and sponsor in North Dakota as well as all national council members across the country. People all over the country would comment to me at the annual council meeting what a great paper it was and how they enjoyed reading all the stories Walt put together.

Walt received many awards for his umpiring career including a charter membership in the National Indicator Fraternity, the Gold Level of the umpire Medals program, and Elite status as an umpire.  He also received the Northern Region Award of Excellence in 2001.  Walt was selected Northern Region UIC in 2004 and worked on the USA Softball National Staff for six years. I know this meant a lot to Walt to reach the level of the National Staff. It was, indeed, a tribute to all his dedicated service and great work throughout his umpire career. As a tribute to Walt and his incredible career as an umpire and State and Regional UIC, USA Softball of North Dakota created the “Walt Stack Umpire Award of Excellence”, given annually to that special umpire who has upheld the example set by Walt Stack of excellence in their own career as an umpire.

In 2019 USA Softball of North Dakota presented Walt with the first ever “Lifetime Achievement Award”. A lifetime achievement award is a prestigious award, presented for the recognition of a career of significant contribution, impactful influence, and a career which exceeds the requisite of high standards, achievements, leadership, respect, and the loyalty for the sport of softball and its participants.

Walt Stack was a man of incredible integrity, uncompromising commitment to high standards, and ethical behavior.  He was a man of high character. “Character is defined by what you are willing to do when the spotlight has been turned off, when the applause has died down, and no one is around to give you the credit.”

On a personal note, like many, I have lost a great friend.  A friend whom I could always count on no matter what. He, indeed, had an impact on my life that I am forever grateful for.   Walt was a blessing to all of us, and he left us his enduring legacy.  A life of service to his family, his friends, his community, and the sport of softball he loved so much.  He taught us that the most important things in a successful life are not tangible.  The most important things in a successful life are the relationships you create and build with your family, your friends, and your God.  So, at the end of the day, nothing else matters.  Walt knew this better than most.

We will all miss our great friend Walt Stack, but we are all so much better off knowing him and working side-by-side with him for so many years in the great game of softball.